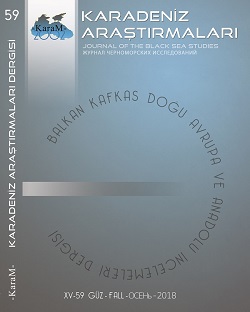 Summary/Abstract: The Black Sea, which is an area of tension between the two poles during the Cold War, has become a sea in which the Warsaw Pact is first dispersed and then the six countries are shrouded with the collapse of the Soviet Union. This multilateralism has given a new dimension to international relations in the Black Sea. The Black Sea Region, which has a dull position within the balances of the Cold War era, began to live in mobility with the evolution of the international system and the perceived new threat perception since the end of the Cold War years. When we look at the developments that have emerged from the last period of the Cold War to the present day, it is seen that this movement has been taking place in every dimension of security, military, political, social, economic and environmental aspects. Due to the multidimensional nature of Black Sea security, many regional and international organizations are operating on the Black Sea. Along with the changing global balances, new equilibria have been set on the Black Sea. In our article, the Russian Federation, the United States, as well as the great powers such as Turkey and the EU position in these new regional powers such as the power struggle in Ukraine will be discussed. The aim of this article in the light of these directions is that the EU is trying to have more say on the Black Sea in the environment that emerged after the dissolution of the Soviet Union; as well as revealing the fact that the hegemony, which he tried to establish on the Black Sea, also disturbed the Russian Federation. In addition, the effect that West is trying to establish on the Black Sea is perceived as a priority security problem in terms of Russian Federation, and the effects of the new conflicts in the region will be studied and analyzed.