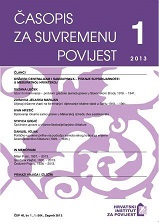 Summary/Abstract: Autonomy is today, perhaps more than ever, a current issue in the European Union and Croatia. Contemporary discussions have revealed that the successful application of this principle depends heavily on tradition. Therefore, it is important to know one’s own history, because it can reveal the roots of current issues. The Croatian tradition of self-administration shows negative tendencies, that is, an uneven distribution of privileges to the benefit of central state authorities. The process of state centralization began with the creation of a modern state administration back in the 19th century, at a time when Croatia was a part of the Austro-Hungarian Monarchy. However, since the Monarchy was until its end, an ancien regime state, a balance was achieved between state centralization and regional or local self-administration. In the research carried out for this article, the author draws attention to the destruction of the tradition of autonomous administration at the time of the Kingdom of Serbs, Croats, and Slovenes/Yugoslavia. Using the example of the municipal administration of Brod on the Sava (Slavonski Brod after 1934), the political manoeuvrings by which the law of autonomous municipal administration was circumvented is reconstructed. The specific research topic is the elections to the municipal council, because electoral freedom is a precondition for any kind of autonomous administration. Through research, a distinction is drawn between the periods preceding and following the introduction of the dictatorship of King Alexander (1929). Prior to this turning point, municipal elections were held in Brod. However, unless the results were favourable, they were manipulated using political means (electoral manipulation, the disabling of post-election coalitions), meanwhile the municipal administration for the city was directly appointed (royal commissioner, secretary). The period is characterized by yearly extraordinary elections (1924-1928), which rendered the normal administration of the city unworkable, and habituated the institution of direct administration by the appointees of the royal government. During the first decade, on twelve occasions Brod was administered by a royal appointee, and of the three times in which there was an elected mayor, on only one occasion did that mayor serve a complete mandate. After 1929, elections for the municipal representation (municipal council after 1934) were not held at all. Instead, right until the end of the interwar period, appointed mayors and councillors administered Slavonski Brod. This article shows the varieties of appointments that were made to the municipal administration: Royal commissioners of the old type, who administered without representation (1919-29), appointed mayors and councillors (1929-1939; 1940-1941), and commissioners of the Croatian Banovina, who administered in conjunction with the Advisory Council (1939-1940).