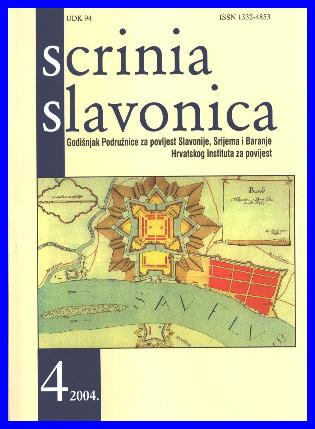 Summary/Abstract: After the renaissance of political life in 1935 the Croatian Peasant Party appeared in the first municipal elections (May 5th, 1935) as the key political force in Slavonski Brod and the Brod district. Although, because of the stipulations of the election act, its candidate Filip Markotić with 70% of votes was not elected as a representative, the party itself exerted its influence and political power in many other ways. It embarked on a fight for position on municipal boards, which turned out to be successful in that the party won almost all the board positions in the municipal elections (1936). After having ‘conquered’ the board, the battlefield shifted over to the issues of power relations between the elected councilmen (and the council head) and the municipal civil servants. At the same time, the old town hall was dissolved, no elections being organized for the formation of a new one. Members to the new town hall were, however, nominated by Stojadinović’s government (1935). This team remained in power until the emergence of Banovina of Croatia, replacing members by cooptation, if need occurred. With no elections taking place, the town office of the Croatian Peasant Party had no option but to forward its complaints to the town administration. Further, it organized events of various sorts with the aim of showing that the Party enjoyed genuine support of the Brod citizens, and took care of day-today affairs via its own organizations, especially the Croatian Workers’ Association (HRS). Furthermore, apart from the activities of the municipal boards, the Party successfully arranged activities of its own organizations: of the so called Economic Fellowship (Gospodarska sloga), which launched an action to increase the prices of peasant products in trade fares, managed to reduce the rather high tax rates obtaining on the Slavonski Brod market, and influenced the price of wheat and milk; activities of the cultural-educational organisation, the so called Peasant Fellowship (Seljačka sloga), which launched a literacy campaign, mounted exhibitions of peasants’ creative work and helped preserve their artistic achievements; and of the Croatian Association for the Protection of Peasants (Hrvatska seljačka zaštita), whose aim it was to protect the people from physical assaults. The influence of and adherence to the Croatian Peasant Party was especially evident at celebrations of those holidays which emerged from the Party’s ideology (Matija Gubec Memorial Day and Antun Radić Memorial Day, birthday of its president Maček, memorial services for the party’s political martyrs), in which thousands of citizens and peasants participated. Such manifestations became the greatest events in Brod at the time. Through its profound presence and relentless activity, the Croatian Peasant Party secured a new victory in the next elections of 11.12.1938, where it won no less than 85% of votes, thereby finally gaining assurance that its candidate