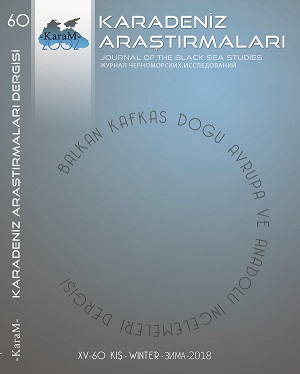 Summary/Abstract: The Balkan countries forming alliance with the guidance of the imperialist states attacked the Ottoman Empire from October 1912 for expansionist desires. In the Balkan Wars lasting until September 1913 and occurring in two phases, the Ottoman Empire sustained a great defeat and lost 83% of its Rumelian territories. In this war, the Fortress of Edirne under the rule of Şükrü Pasha had served as a glorious defense point with great sacrifices against advantageous enemy forces. However, draining food stocks, worsening weather conditions, and the increase in enemy attacks had made military defense impossible. Therefore, Edirne surrendered to the Bulgarian and Serbian forces on March 26th, 1913 after a resistance lasting for 160 days. Şükrü Pasha and high ranking officers were taken to Sofia whereas low ranking officers were sent to concentration camps. After the surrender of the city, all of the 45,000 soldiers defending the city were taken captive. According to official records, 13.000 soldiers became martyr during the siege. After the silence of Edirne, the city was looted; horrific atrocities were committed against both its people and its soldiers. Moreover, thousands of captive Turkish soldiers were systemically slaughtered. One of the most serious carnages was committed within the walls of Sarayiçi concentration camp on Tunca Island. About 20.000 Turkish captive lost their lives there due to starvation, cold, infectious diseases and cruel treatments. Surviving Ottoman soldiers were taken to the prison camps of Harmanli, Haskovo, Stara Zagora and many others in Bulgaria. However, cruelty continued in these prison camps and groups of 3.000-4.000 people were collectively slaughtered. The number of captive soldiers slaughtered or with unknown fate are about 35.000. The present study examines this heartbreaking issue in order for all of us to learn a lesson from history since the atrocities to Turks during the occupation of Edirne in the Balkan Wars have been forgotten and especially our young generation doesn’t know the incidents happened a century ago in detail.