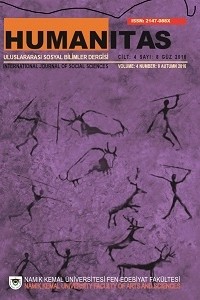 Summary/Abstract: The Turkish War of Independence is the struggle for existence of the Turkish people. It is the epic of Anatolia which didn’t accept the Sevr Treaty and stood up to it. The National Struggle, which firstly started with the name “National Forces” (“Kuvâ-yı Milliye”), ended with the establishment of an independent State of the Republic of Turkey at the end of the fouryear struggle of the public as a consequence of Mustafa Kemal’s landing in Samsun on May 19, 1919. In the process of the Turkish War of Independence, Tekâlif-i Milliye law enacted for the purpose of continuation of the struggle has a significant place. The contributions of our cognates and our co-religionists are important in continuing the National Fight. One of the most important of these is the aid of the Bulgarian Turks. They provided significant supports to the National Struggle in terms of the material, military and moral ways. In this study, the reflections of the supports given by the Bulgarian Turks to the War of Independence on Ahali Newspaper published in Bulgaria will be scrutinized. News and writings about the War of Independence in the Ahâli Newspaper will be examined chronologically.Thus, the contributions of the Bulgarian Turks in the establishment of the State of the Republic of Turkey, which they always regard as their homeland, will be revealed more clearly.