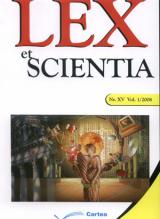 Summary/Abstract: The current study case intends to render a phenomenon not at all to be neglected in the Romanian society: the encroachment of some authorities in the exercise of operation of some other authorities. The phenomenon is not the only one, it has been censored by the media, courts of law for many times, but it was elected especially because it appeared as a result of some legislative transformations, at their turn questionable by the critics. The prefect’s institution plays at present a very important part in the life of the local community, although the power center of this authority parts from the central level. In this context, it is not to be neglected the prefect’ s part in the life of the local community and how far its attributions can extend, besides, how far it can interfere in the appointment of the heads of some decentralized public services without breaking the Constitution and the laws that govern its activity.