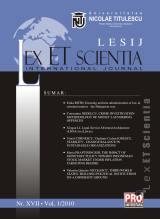 Summary/Abstract: This paper has taken into account the legal practice generated by the two texts excerpted from Law no. 554/2004, respectively articles 14 and 15. The need of such an endeavour is justified by a heterogeneous practice, which has created confusion amongst justiciable people. The suspension of administrative acts represents an institution in itself, and in this situation, we deal with the cancellations ruled by the courts when certain cumulative conditions are not complied with. This is precisely why we need both a theoretical and a practical analysis of the institution of administrative suspension by an administrative court, in the context of the two texts of the law mentioned above.