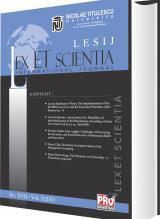 Summary/Abstract: The Romanian legislation, meaning by this Law no. 554/2004, creates in article no. 5 a special regime for some administrative acts which will be considered as exceptions from the “common administrative procedure”. These acts are not subject to the review of the courts, the exception being a total one or a partial one as it will be described in this study. The existence of the administrative procedure does not mean an absolute control on the administration. This is in fact the main reason why this article was included in Law no. 554/2004 and all implications will be described in this study.