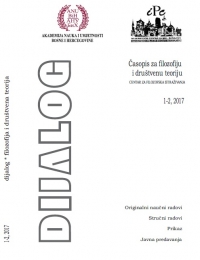 Summary/Abstract: This article focuses on analysis and critical review of the theory of “another cosmopolitanism” through the process of “democratic iterations” advocated by Seyla Benhabib. Her theory (cosmopolitan outlook) is inspired by Kant’s philosophy and rests on the third article of Perpetual Peace – the universal right to hospitality. The essence of revisiting and reformulating this universalistic tradition is the reconstruction of the “moral outlook” within the “moral dia¬logue” model (“democratic iterations”), guided by principles of universalism and egalitarian reciprocity. Benhabib states that the principles of universally moral relationships (tolerance, recognition and acceptance) and egalitarian re¬ciprocity can serve as a test of general universality. In this respect, author pro¬poses the introduction of the dialectic of universalism and discrimination or, in simple terms, the dialectic that promotes the ideal of equality and suppresses discrimination based on prejudice. What appears to be somewhat inconsistent and should be noted is that the author makes a certain “compromise of univer¬salism”, in a manner similar to that of Will Kymlicka in his theory of minority rights and multicultural citizenship, when she accepts that group (minority) demands resulting from different contexts and perspectives must always be considered. Theory of “another cosmopolitanism” suggests that the universal relationship must always be placed in context.