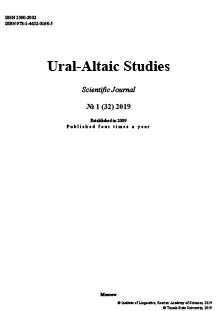 Summary/Abstract: In the scientific literature, the generally accepted view is that the dialect basis of the modern literary language, which was created in 1928, was Kipchak dialect, differs significantly from the first dictionaries, prepared in the 19th century under the leadership of Ismail Bey Gasprinsky on the basis of Oguz dialects. In article, on the basis of the analysis of the electronic summary dictionary5 of the literary Crimean Tatar language and the first Crimean Tatar dictionaries [Bodaninsky 1873, Tatar-Russian dictionary 1902, Russian-Tatar (Crimean Tatar) 1906] on the signs distinguishing Kipchak and Oguz languages, it was revealed that it is not possible to identify the signs that reliably distinguish the dialect of the first dictionaries and the modern Crimean Tatar language. Between them there is a complete linguistic continuity, so we can assume that the literary language was not created in 1928 after the linguistic conference, but instead in the 19th century, by the Crimean Tatar educators.