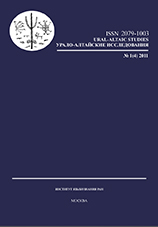 Summary/Abstract: In the first part of the article, called “Proto-Turkic weapons complex”, we list the names of different weapons, reconstructed for the proto-Turkic (i.e., their reflexes are found in Chuvash) and compare these names with the archaeological data about the weapons in the burial complexes of Ordos, dated by VIII-IV centuries BC. In the second part of the work, called “Common Turkic weapons complex”, we have collected the names of the weapons which had been preserved from the proto-Turkic as well as new words which appear only in common Turkic (i.e. their reflexes are not found in Chuvash, but are attested in Yakut-Dolgan and/or Siberian group of languages). These names are compared with the findings of weapons in Hun-Sarmat burial complexes of Sayan-Altai region, dated by II century BC — V century AD.