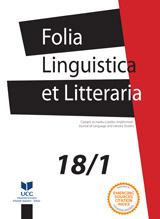 Summary/Abstract: In a patriarchal society, a woman is an object subordinated to the power of men, without any rights and without significance as an individual. Marie von Ebner-Eschenbach shows various forms of patriarchy as a space of male power in her three short stories “Die Totenwacht”, “Mašlans Frau” and “Das tägliche Leben”. The female figures come from different social backgrounds: Anna from “Die Totenwacht” comes from a poor family and is subjected not only to male dominance, but above all to its tyranny and becomes a victim of rape. For the man, the status of the woman is reduced to possession and he believes that his crime can be corrected by marriage. The heroine is morally superior to him and she refuses his marriage proposal. Evi, a rich peasant daughter from “Mašlans Frau” rebels against double mourning and is determined not to forgive the violation of female dignity.