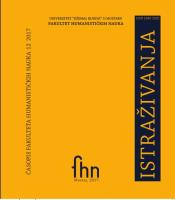 Summary/Abstract: The German Bourgeois tragedies of the second half of the 18th century reflect the image of a patriarchal structured family, where a woman as a mother is not only marginalized. Sometimes, she completely dissapears. In this paper, the structure of the family has been analysed with special emphasis on the construction of the mother’s character in three paradigmatic works, Lessing’s tragedy “Emilia Galotti”, Schiller’s “Kabale und Liebe” and Wagner’s “Die Kindermörderin”. While the father is the patron of family honor and the bearer of bourgeois values, the mother is shown as a naughty and naive woman who does not recognize the danger that comes from the aristocratic world. She therefore does not deserve a mythical role and remains out of the circle of self – sacrifice and morality. The myth of motherhood is paradoxically realized in a world without mothers: the utopian bourgeois world of sentiment disappears in the cruel tyranny of patriarchy. As the daughter has to die to preserve her life as her father’s permanent property, the mother must disappear from the drama precisely because she symbolizes lost innocence and the lack of moral integrity.