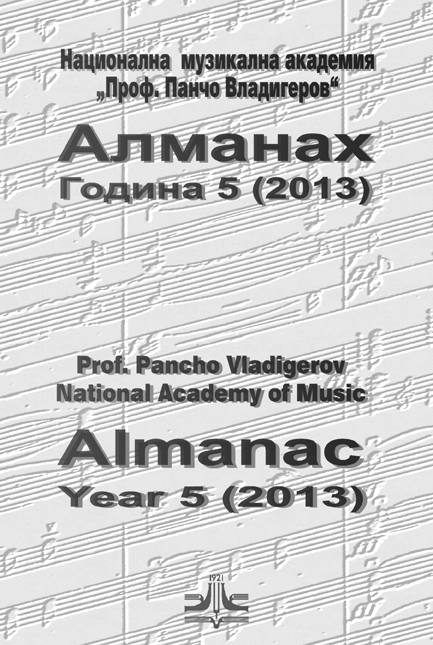 Summary/Abstract: Yana Yazova’s work brings us back to the cultural environment integrity problem, the interaction between the arts, the critical thought, i.e. the components of placing Bulgaria into European culture, from the Antiquity to Nietzsche’s time – without missing any stages, without ignorance and darkness (“in which theft and murder take place”), without forbidden books and burnt manuscripts. Reality has turned Yana Yazova into an example of cultural hermitage that is rare among Bulgarians, one that reminds of Nietzsche’s own. According to Schindler, at the heart of a musical work there is only discovery (inventio), a spark, an idea. Here we outline our main points: 1. how Beethoven’s thinking, apparently both literary and musical, inspired the Late Romantic Gesamtkunstwerk (Wagner); 2. comparison of French programmatic music, such as Berlioz’, and the characteristic genre music of the 13th century, such as Beethoven’s Pastoral Symphony; 3. the absolute music towards the end of the 19th century, Hanslick’s Tönend bewegte Formen and Geistfähiges Material, and more musical interpretations (see the correspondence of Liszt with Wagner and Brahms with Joachim); 4. musical work is considered autonomous when compared to what; 5. the dispute between formalists and hermeneutics. Similarly to Beethoven’s thoughts, the existential layer of Yana Yazova’s work, her cultural hermitage, is inseparable from all she has left us in her carefully prepared and edited writing. In European cultural environment, Schering’s time, which coincides with Yana Yazova’s, is still within European cultural situation’s unity and integrity.