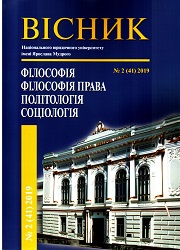 Summary/Abstract: Problem setting. Among the democratic freedoms defined by the Constitution of Ukraine is the freedom of speech, which is considered not only in itself, but also as freedom of the press. But legally declared freedoms in a democratic society necessarily require the existence of real mechanisms for their implementation in various spheres of public life, as well as the state’s ability to protect them from any encroachment.Recent research and publications analysis. The problem of press freedom is very interesting for scientists and the public. In addition, the situation with the development of freedom of speech in Ukraine is the subject of monitoring of domestic and international organizations.Paper objective. The purpose of the article is to investigate the factors that influence the degree of development of freedom of the press in Ukraine, as well as to show the interdependence of the level of freedom of the media and the state of democracy in the country.Paper main body. Based on the structure of press freedom, one can analyze the extent of this freedom.Economic independence of the media. Most of the media in Ukraine is privately owned and controlled by a small group of wealthy people who use their resource to ensure personal interests.This, in turn, could threaten society by limiting the pluralism of ideas, the principles of freedom of speech and the press.Legal component. Constitutional and legal regulation of media in Ukraine is one of the most progressive in Eastern Europe, despite the fact that legal guarantees of media activities are not always implemented in practice. The rights and obligations of the media are regulated by a number of legislative acts, as well as resolutions of the Verkhovna Rada of Ukraine and the government of our state, presidential decrees.Legal protection of journalistic activity freedom. Freedom of the press becomes real where the legal protection of freedom of journalistic activity is implemented. Ukraine remains one of the most dangerous countries for journalists and journalistic activities - physical attacks on journalists, arbitrary detention and intimidation, kidnapping, murder of journalists and media workers do not promote the principles of freedom of the press and create psychological pressure on domestic media workers.Political aspect. An indicator of freedom of speech and freedom of the press is the presence/absence of censorship in relation to the media itself and to the materials distributed. The Constitution of Ukraine emphasizes the prohibition of censorship, while there are certain limitations that can sometimes be motivation for sanctions, broadcasting stops, ban of certain media and internet pages.Freedom of the media is a necessary element of the functioning of a democratic political regime. The state of freedom of the press directly influences the level of development of democracy in the state. “Partly Free” Ukrainian Media is one of the reasons “hybrid political regime” in the ranking of countries in terms of democracy.Conclusions of the research. It should be noted that press freedom in Ukraine as one of the indicators of democracy in general strengthened its position. At the same time, there remain reasons for concern: the monopolization of media markets, the concentration of private media in the hands of a small group of wealthy businessmen (and the possibility of their influence on political processes), different methods of reacting to pro-Russian propaganda and violence against journalists in the country, especially in the East.