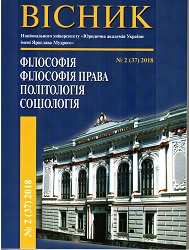 Summary/Abstract: Problem setting. The urgency of the analysis of the current experience of sociological assessments of the level of trust in social institutions, in particular, the court, is due to the fact that for European countries the paradox of mass consciousness becomes more and more characteristic: confidence in the court decreases even in conditions of increase of efficiency, accessibility, justice of justice, that are recorded according to the results of judicial reform. Requirements and expectations are growing (especially in more educated or socially adapted categories of the population), and, accordingly, there is a probability of inconsistency of pace of reforms and the presence of positive dynamics of trust in court. Recent research and publications analysis. The assessment of trust in the courts as a factor of trust in public authority is at the center of attention of domestic and foreign scholars. These problems were addressed by B. Barber, M. Buromensky, M. King, I. Lavrinenko, V. Lebedev, N. Luhmann, C. Morgner, O. Serdyuk, T. Habriyeva et al. How¬ever, each state is looking for its criteria for monitoring the activities of courts. Paper objective. The purpose of this article is to formulate the main principles of national monitoring of the level of trust in the court and the judicial system on the basis of analysis, firstly, of the most famous international sociological methodologies and, secondly, the peculiarities of the current Ukrainian situation in this area. Paper main body. Trust is a generalized indicator of the norms, attitudes and values that underlie social cooperation, and in public life, trust fosters community unity and community building, and in the economic sphere, it accelerates cooperation and interpersonal exchanges. As a socio-psychological category of trust, it is a characteristic of an open, positive relationship between the parties and reflects the confidence in the honesty and benevolence of the other party with which the trust is in one way or another based on his experience. From this point of view, trust has certain limits based on knowing about the other party that is trusted. Full trust is often identified with faith, because the mechanism of such trust is no longer based on rational principles, that is, on experience and on prediction and prior knowledge of one side of the second and includes irrational motives of the relationship. In social sciences, the level of trust one party can trust in another is measured in the belief in the honesty, charity and competence of the other party. Based on recent research, distrust can be forgiven much easier when interpreted as lack of competence than inadequate benevolence or honesty. The assessment of trust in the court is recognized as a measure of the rule of law (rule of law). This approach is used in a variety of international and national practical tools for assessing democratic regimes. Conclusions of the research. Institutional trust can be considered as a kind of indicator that determines social well-being of the population, in addition, it is an important condition of social communication, through which the consent, understanding and dialogue of the parties is achieved, and it becomes possible to seek new opportunities for further development. The increase of trust in the judicial system of Ukraine is one of the tasks of the judiciary and is outlined in strategic documents of the development of the judiciary of Ukraine in recent years. The level of trust (distrust) of citizens to justice is affected by a number off actors, the most important among which should be called: the quality of legislation, on the basis of which decisions are adopted and substantiated; the quality of the judiciary; the degree of accessibility and openness of justice; coverage of court work in the media; the degree of execution of court decisions. From trust in the court it is necessary to distinguish between the perception of justice by citizens, the level of which is influenced by the ability of citizens to protect their rights in court, the application of the law by the court in an appropriate and effective manner, equality and non-discrimination before the law, the legality of the adopted judgments, the effective struggle of the state with corruption, etc.