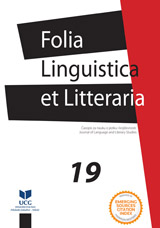 Summary/Abstract: Up to the period of Renaissance, pastoral was perceived as a very monotonous genre. However, Renaissance made pastoral allegorical not depriving it of its basic features. This genre achieved an enviable success in both Croatian and English Renaissance literatures by accomplishing itself in various literary forms, starting from poetry over stage forms to prose. William Shakespeare and Marin Držić represent two outstanding Renaissance figures in their homeland literatures. The aim of this paper is to offer a comparative insight into William Shakespeare‘s A Midsummer’s Night Dream and Marin Držić‘s plays Tirena and Grižula. One may wonder can Držić and Shakespeare be compared being that there are no direct, either temporal or cultural, relations between the two authors. However, due to the mutual intertextuality some very interesting and significant similarities have been found between their texts. Thus, Držić can be seen as the anticipator of some Shakespearian themes and their relationship can be seen as reversible.