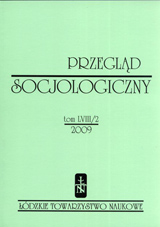 Summary/Abstract: The paper analyzes the roles adopted by Polish sociologists from 1945 to 1989, i.e. until regaining sovereignty by Poland. Sociologists in Poland are assumed to have constituted a heterogeneous group, representing various attitudes towards the political system: active legitimating of the system, passive consent, objective expert or demonstrating a critical attitude towards the system or its elements. Depending on the adopted attitude, Polish sociologists defined their intellectual role differently in public discourse. Their definitions changed, rather than remained fixed, as the sociopolitical conditions transformed. The following issues are also discussed: whether the actual practice of Sociology was possible during that period, the ways in which sociologists neutralized their participation in building the regime, and the techniques of evasion and “legal criticism” of the system. The research material includes comments made by well-known sociologists in the official press and book publications from that period, in which they specify their attitudes towards the following matters: the function of Sociology and the tasks of a sociologists in a socialist country, and the position of Sociology among other sciences and political doctrines.