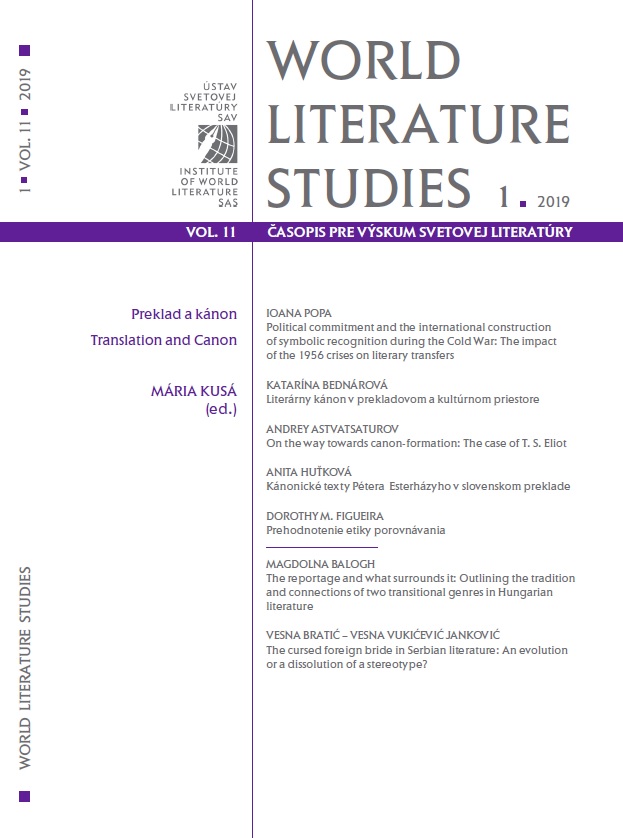 An evolution or a dissolution of a stereotype?

Summary/Abstract: The paper traces both the trajectory of and possible reasons for the survival of the destructive foreign bride stereotype in Serbian literature. The authors focus on two prominent epic narratives, that of Irene Kantakouzene, the wife of Serbian Despot Đurađ Branković and that of Venetian born wife to Đurađ Crnojević, the ruler of Zeta, in different renditions, both folk and authorial. In the (pre)Romantic narratives foreign women are power-hungry lawful wives to Serbian princes and the imminent fall of the dissolved Empire is wrongly attributed to them. The popular (re)construction of the traumatic was unquestioningly transferred in toauthorial narratives by Romantic Serbian poets: foreign ladies ruined their Serbian royal husbands and, consequently, the people. Born and raised in this tradition, Slobodan Selenić’s Stevan Medaković disregards the patriarchal code and marries his English sweetheart. However,despite her spirited character, both Elisabeth’s actual otherness and her husband’s notions of it, will prove an insurmountable obstacle to domestic happiness of the daring young couple.The authors touched upon complex discursive mechanisms which (re-)produce otherness and tried to identify textual chronotopes and elements of cultural anthropology that govern the symbolical characterization of the foreign woman.