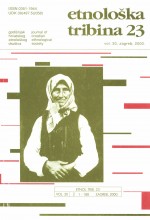 "Nisu dali gospodaru 'z ruk...“. Starost u prigorskim i zagorskim selima između dva svjetska rata
“They Wouldn’t Let It Out of the Master’s Hands...” Seniority in the Prigorje and Zagorje Villages between the World Wars

Summary/Abstract: The paper deals with the position of the elderly in the complex families of the Prigorje and Hrvatsko Zagorje regions in the time period between the World War I and the World War II. It aims at answering the questions until what age do people maintained the power within their families, how was this power expressed, and how their work and ownership over land influenced their maintenance of authority. The paper also warns about the differences between the widowers and widows, shown through the differences in the land ownership.