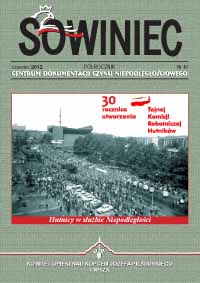 Summary/Abstract: The article describes in detail two periodicals of the Independent Self-Governing Trade Union “Solidarity” being published during the State of War in the Krakow district of Nowa Huta outside the reach of official censorship: “Solidarność Hutników” (the Solidarity of Steelworkers) and “Nowohucki Biuletyn Solidarności” (the Nowa Huta Solidarity Bulletin). These periodicals, along with the biggest of them ”Hutnik” (the Steelworker – this title has been described in detail by the same author in the 29th issue of “Sowiniec”) were organs of the Secret Labour Committee of Steelworkers (TKRH) – a conspiracy trade union structure of the biggest employer of the region – the Metallurgy Factory Vladimir Lenin Steelworks. Thanks to these periodicals, the union activists could communicate with the employees of the Steelworks. Printed in hiding, they included in editional boards well-known journalists and opposition activists. The author presents in detail every stage of creating periodicals for illegal distribution: editing, the ways and places of printing and distribution, and analyses the subjects tackled by the [periodicals. In years 1986-1989 35 issues of “Solidarność Hutnikow” were published – the periodical was closed due to the election campaign of 1989. “Nowohucki Biuletyn Solidarności” survived the so-called June elections and all ownership transfers and still keeps the function of the work periodical of Independent Self-Governing Trade Union “Solidarity” in Tadeusz Sendzimir Steelworks, excessing in 2008 1000 of published issues.