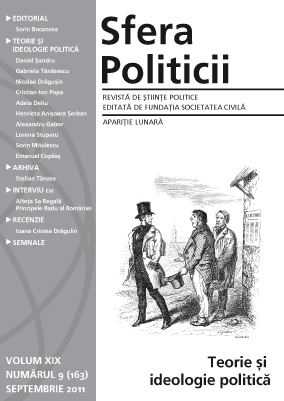 Summary/Abstract: There has been many a debate on the end of ideology, and in every case, the debaters talked about it while adopting, voluntarily or involuntarily, ideological positions. Beyond any differences, the speeches on this topic have stood between two components: truth and solidarity. One could say that ideology is the effort to transfer a truth from the elite to the masses in an effort to create a type of solidarity different from the one generated by faith and fear. At the opposite end of the society of truth lies the pragmatic society. The feeling that the society of truth is fading and that the latter is being built is apparent in the talks about the end of ideology. The signs of this end have been spotted in such phenomena as the regression of politics into economics or the proclaimed triumph of liberal democracy. Yet, no one can decide to enter or leave ideology. As long as we project ourselves in terms of truth (whatever it may be) or solidarity, we already find ourselves within an ideology.