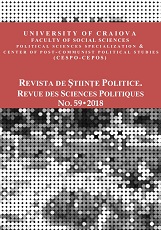 Summary/Abstract: The paper presents the internal context that led to the establishment of the authoritarian regime and also describe the unfolding of the events of February 10th/ 11th, 1938. It is also analyzed the plan for establishing the regime and, at the same time, the way that the King Carol II positioned at that moment on the Romanian political scene. Another purpose of the research is to identify the relation between the King and the Romanian political class and to observe the manner in which the Sovereign has capitalized on the authoritarian position that the new regime has offered him.