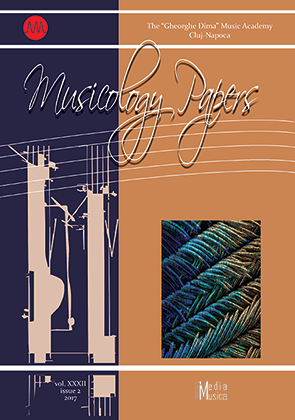 Summary/Abstract: This article examines the relationship between the Bassarabian music of the second half of the last century and one of the components of the national musical tradition – the chant of Byzantine tradition. The author points out a series of declared adherence to the Byzantine vein along with latent insinuations into this cultural layer, manifested through recognizable stylemes, modal and rhythmic undertones and a specific ethos. The paper also provides two analytical incursions into the latter category of works, with the selected examples being relevant for the various and subtle forms of scholarly valorisation of psaltic music. Ghenadie Ciobanu’s composition Pentaculus for flute, English horn, clarinet, bassoon and horn, claims its roots in archetypal thinking. It has a double root: the Byzantine melismatic style and the improvisatory genres of the Romanian folklore. The composer operates in the area of interference of ​​the two traditions, delving down to their very core. The poem Miorița for voice, organ, bells and magnetic tape by Tudor Chiriac comes close to psaltic art through its vocality and marked monodic character, the compositional techniques used, as well as through the modal, metro-rhythmic and ornamental characteristics of the melodic line. The author also insists on certain commonalities of vision and sensibility that can be drawn between the work under consideration and the chant of Byzantine tradition. In the conclusion, the author remarks that in its journey towards modernity and universality, Bessarabian music is more and more sensitive to the beauties of the Byzantine musical treasury and more and more prepared to incorporate them without diminishing or harming their value.