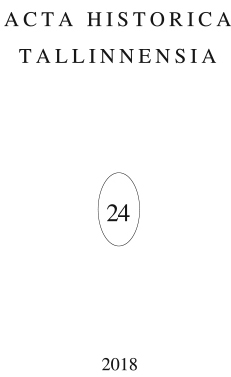 Summary/Abstract: It goes without saying that people who used to be portrayed in Estonia belonged among the wealthiest and most powerful in society. Representatives of the lower classes, including the peasantry, were as a rule not portrayed, and if they were depicted at all, the aim was to record their typical clothes or jobs they were carrying out at the moment. Thus the first pictures of faces of Estonian peasants appeared as late as the turn of the 17th–18th centuries, although even then these images were not really portraits, as these largely constituted just some sort of ‘labels’ on the presents the peasants made to their local church, for example, portraits of two peasants at Kirna manor in Järva County, Nätsa Ants (Netze Hans) and Reegla Jaan (Rekela Jahn). These images were on the frame of an oil painting Adoration of the Shepherds, donated by the two men to the church in Türi in spring 1692. The same can be seen in the glass painting technique portraits of two Lohusuu peasants, Johan Karlipoeg (Johan Carl Soñ) and Vadi Andres (Andres Hans Poick), donated to the church at Lohusuu near Lake Peipsi together with new windows in 1723. A totally different, more detailed manner is represented, for example, by two watercolour portraits of peasants in western Saaremaa, painted in the early 1740s by a missionary despatched there from Moravian Brethren in Herrnhut in Germany.