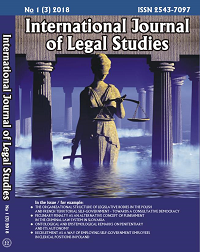 Summary/Abstract: The paper is of descriptive character and its aim is to present a problem regarding public debt and budget deficits both in historical terms (from the point of view of various economic schools) and the perspective of law. The definitions and classifications of these concepts are presented. The budget deficit and public debt are phenomena of economic, financial and legal nature. Depending on the nature of these phenomena we have in mind, their different concepts and functions emerge as well as problems and ways to solve them. The issue of the budget deficit results from the approach to budget balance. In turn, the issues of public debt are a derivative of the budget deficit problem, financed by a public loan that creates public debt. The budget deficit and sources and forms of its financing result from the adopted organization of the public finance sector and are subject to planning and decision by designated authorities and according to legally defined rules. They should not be treated as unforeseen or accidental events. The law, ie constitutional provisions and provisions of public finance laws, as well as international arrangements binding on OECD member states and the European Union, determine the division of powers in determining the budget deficit, ensuring in this respect the government's exclusivity in determining the upper budget deficit.At present, it seems that both the governments and the authorities of the independent central banks have concluded that it is impossible to permanently balance the state budgets and liquidate public debt. One can even come across opinions that this is a necessary evil for the permanent assurance of the functioning of democratic states. An overview of theories relating to budget deficits allows for the separation of its various types. The proposed divisions constitute a certain attempt to systematize the discussed issue, enabling not only an accounting capture of the result of the budgetary policy conducted by the state, but a closer look at the causes of their formation.