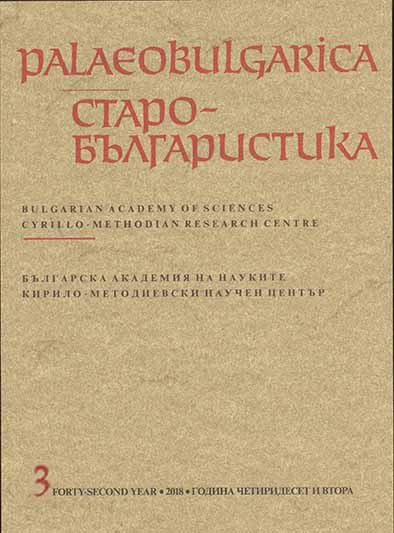 More about the Origin, Meaning and Use of Old Bulgarian sr’dobolya

Summary/Abstract: This study aims at complementing, defining and analysing the semantics, word-formation and original meaning of the Old Bulgarian compound срьдоболÿ in a diachronic aspect, by tracing its earliest attestations in sources related to the Preslav Literary Center and to the second redaction of the Old Bulgarian liturgical books dated to the reign of Tsar Symeon. It refers to the data from the 10th-century Mostich and Synkel epigraphs of Preslav. The presence of such models of compounds in Old Slavonic texts is discussed in favour of the Slavic origin of the lexeme. By means of a comparative study of the parallel historical semantic development of the word in Old Serbian and Old Russian literary sources, the assertion that срьдоболÿ is a native Slavonic word – i.e., formed from a Proto-Slavic root *sьrd- and a second deverbal component of bolěti, perfectly coherent with the models of compounds such as as дрýводýлÿ, земледýлÿ and the like is defended. The conclusion confirms that the original meaning was related to the collective forms ‘blood relatives, family members, relatives; consanguine, cognate, familiar; Sippe, die Verwandten’ and not to the honorable title of a courtier or of an office holder (palace minister) in the hierarchy of the First Bulgarian Kingdom.