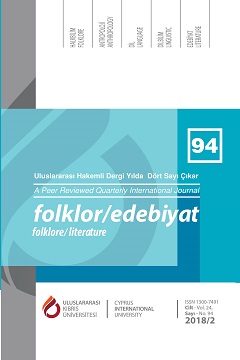 Summary/Abstract: This study examines the miracle of the March of Stones and Mountains found in Abdal Musa Velâyetnâmesi in terms of time, space and object. Sufism which appeared in the 9th century is the foundation of sufi school in the 15th century. As a result of narrating and recording the miracles and supernatural states of school’s leading personalities, the genre of hagiography (menâkıbnâme or velâyetnâme) came to shape. In Alevi–Bektashi tradition, these works took the name of hagiography in 15th century in the Anatolian field. The holy man also known as Abdal Musa Sultan, as a member of Hacı Bektaşi Velî –one of the Ahmed Yesevi dervishes– is a Turkish eren who lived in the 14th century. In the preparation of this document, the main source is Abdal Musa Velâyetnâmesi translated into Latin alphabet by Abdurrahman Güzel, published in 1999. In the first part of the study, the terms of menâkıbnâme and velâyetnâme are covered also brief information about Abdal Musa is given. The second section involves the concepts of time, space and object by naming them the three factors and mentioned about the chained nature of these factors. In the third section the analysis of the miracle according to the three factors begins. Later on, the symbols are analyzed following the order they are located in the text. Furthermore, beside the traditions of Alevism and Bektashi, Anatolian and certain international cultures are also used in the evaluation of the symbolic meanings. In the last segment of the analysis several symbols are compared to each other. Abdurrahman Güzel’s text of the miracle and the variants of Abdal Musa are given at the end of the appendix study.