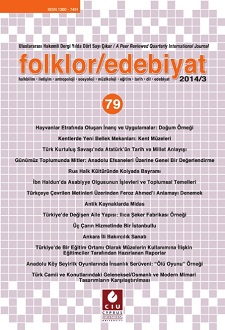 Summary/Abstract: Game which is limited by its rules by crossing the borders of daily life or which is defined as to act independently, involves different actions from religious ceremonies to children amusements, from women-men relations to adult amusements. Including these, village dramatic village performances are a type of plays that has theatrical specialties. They may be profane, entertaining or collectively practiced and maybe sometimes they have rituals in order to increase wealth and richness. One of the dramatic village performances theatrical plays in Anatolia practiced since centuries is a ritualbased “Dead Play”. This work aims to show people’s experiences by tracing the path of collective sub-consciousness plays. There are a lot of symbols at “Dead Play” which has ritual character. One of the methods used in the analysis of the symbolic meaning of the archetypal approach. It is important that archetypes formed at collective unconscious. The first example of archetypes which located in the depths of the human spirit. Archetypes of the unconscious elements are universal. Thousand-aged collective experiences are demonstrated in people’s beliefs, dreams, myths, fairy tales and collectively practiced ritualistic plays. In this context, by examining pay, mutual sub consciousness archetypes will be analyzed. Also, as archetypes are global, from play to mankind adventure’s reflection to plays will be evaluated. In this study, Dead Play will be considered under two main heading as “archetypal patterns and molds”, “archetypal images”.