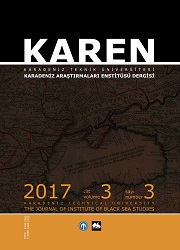 Summary/Abstract: This study involves the semiotic interpretation of the high mother variant of the legend of the Golden Cradle which is a Crimean–Tatar tale. The peninsula located at the Northern Black Sea is called Crimea. Turks living there are called Tatars. Semiotics is uncovering the visible and unseen meanings within an expression or work and analyzing them through various methods. One of those models is Greimas’s Square of Opposition and it is used in this work. The word mother is a significant concept that can be seen in mythology, art, sociology and psychology at the same time. The source of its significance is the symbolic meanings it possesses which are existence (origination from the birth) also feeding and protecting. On the other hand, the Golden Cradle is the existential legend that the Crimean people projected on their future generations. This legend has various variants; the one related to high mother has its sentimental value improved as it feeds from the concept of mother. The first part of the work involves the simplified version of the story. The second part contains the interpretation of key events occurred in the course of tale also this part covers the key concepts. The third part is about the mother archetype. Mother Umay is covered in the fourth part. The importance of wolf symbolism in Turkish culture is presented in the fifth section. In the six and the last section the Greimas Square is given.