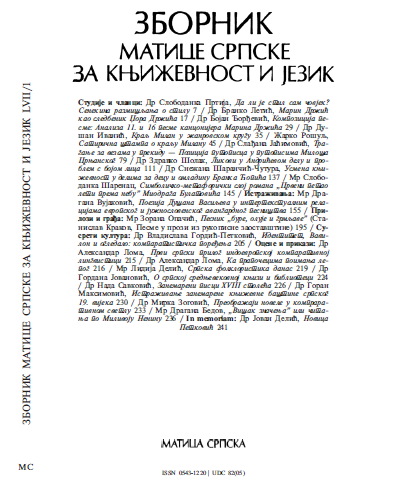 Summary/Abstract: Travelogue as a genre survives in the continual establishment of relations between the known — unknown, foreign — domestic, close — different, expected — surprising. The travel-writer is a unifying instance and a central constituent of the travelogue structure which confronts these poles and links them in a unique concept. The paper interprets the position of the travel-writer in Miloš Crnjanski’s works, particularly in Letters from Paris and Love in Tuscany. In the pronounced subjectivization of the travelogue model, the autobiographic I is doubled into I of the fictitious travelogue narrator and, as Crnjanski’s travelogue was built in the slippery border-line between the factual and fictitious, thus the voice of the travel-writer alternatively appears from differently established positions. Actually, this avant-garde writer in his travelogues, but also in his works of memoir character, quite often uses the procedures of fictional prose, narrati- vizes the travelogue text organizing and reshaping the elements of empirical reality according to the personal rules of artistic experience, and not according to the logic of reality and facts.