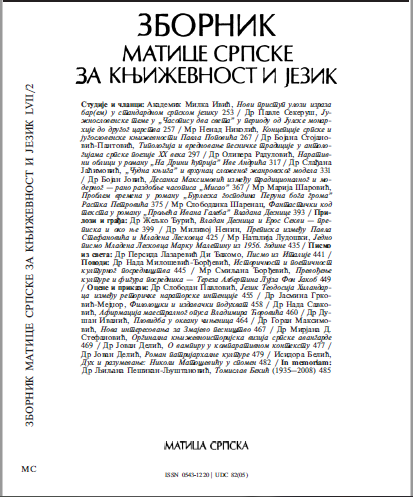 Summary/Abstract: When it comes to the travelogues of Miloš Crnjanski, one can conclude that they are never just travelogues, but works functioning with the inclusion of various literary procedures and elements of other genre patterns into travelogue basis. The work which in its genre complexity and resistence to a clear genre categorization is unique in the Serbian literature, is certainly the prose book Kod Hiperborejaca (Among the Hyperboreans); awareness about the unusual quality of the genre structure and about the unique thematic and compositional idea of The Hyperboreans was expressed by Crnjanski himself several times in interviews which he gave on various occasions in the last three decades of his life. When the work is viewed from the travelogue viewpoint, one cold approach it as an additionally sophisticated manuscript whose limits were stretched so that they assimilated the categories of other genre patterns. The foundation of the book is of travelogue nature: the person whose voice we hear exists in a foreign world, a foreigner who is stimulated by the dislocation from his homeland and the socio-historical context to discuss continually a broad topic of being a foreigner, the paths of his own destiny and the destiny of the nation he belongs to, all through the listening of voices from the completed reading which testify about the final outcome of human destiny. Primarily under a strong influence of the memoirist and the fictional, novel-like aspect, the travelogue basis is changed and included into a literary whole which by its complexity surpasses the possibilities of form which we, otherwise, would call the travelogue.