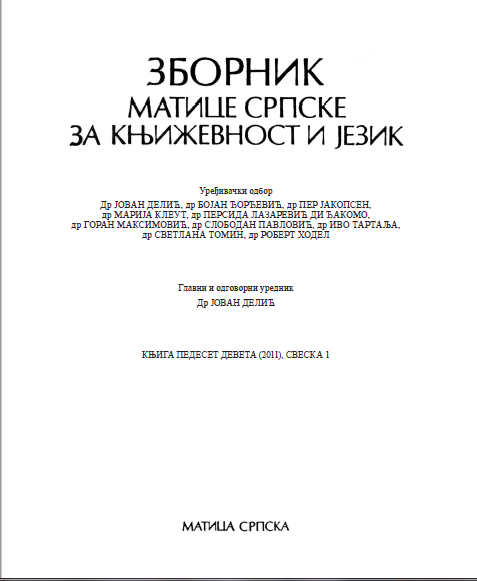 Summary/Abstract: Of all subtexts in Vasko Popa’s poetry studied so far, it seems that the least studied is the one which relates certain poems and circles of poems of this poet to the alchemic tradition. In the book of poems Nepočin-polje we recognized several such links. In the first place, it is the case of the book’s symbol whose basic motive is Uroborus, which has a significant position in the alchemic symbology. Moreover, in the poem Srce belutka we also noticed the relations with certain alchemic texts which are linked to Uroborus and life of a stone which has a heart, i.e. soul. We also found alchemic layers in the book of poems Vučja so. The circle of poems Ognjena vučica, one would say, is completely based on the motives from alchemic tradition. She-wolf is the mother-Earth, and the sky represents the male principle. In the earth, there are processes of transformation of stone and ore into the supreme matter, where the wolves-stones are embryos. In the mentioned cycle we also see the motives of fire, mercury, salt, iron, gold, which are also related to alchemy. In the same book, in the circle of poems Vučje kopile, more precisely in the 4th and 6th poem, one can notice relations illustrating ancient beliefs about smiths, which are again in accordance with the alchemic tradition. We also recognized the meaning of the motive of dew, which had a role in the preparation of the stone of wisdom, as well as the colours denoting specific stadiums in the process of its preparation. However, the poem Raspra o rosi from the book Rez explicitly talks about alchemy.