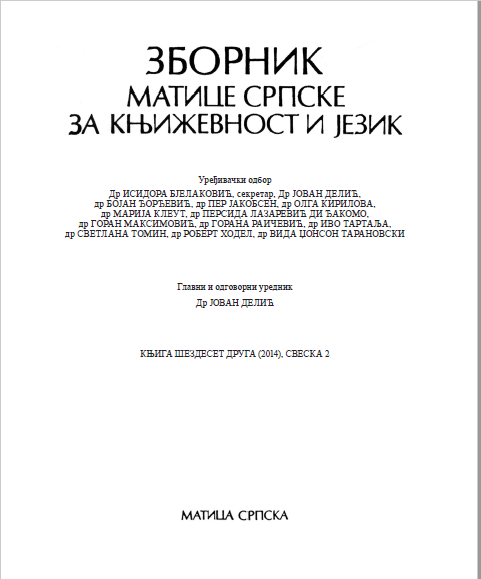 Summary/Abstract: The paper deals with an extract from the Serbian Prophetologion held by the State Historical Museum in Moscow (GIM, Collection of P. I. Shchukin, No. 31) which, in the author’s opinion, dates from the second decade of the 14th century (in the literature, it has been broadly dated into the 13th century). Accordingly, this manuscript is contemporary to the prophetologia of Dečani and Crkolez. Having in mind that no more than eight Serbian prophetologia, either complete or in fragments, have been preserved, and that all of them date from the 13th-14th centuries, this written monument is important for the history of Serbian literacy. The fragment was first subject to codicological and pal- aeographic analysis; its structure was analyzed in detail; finally, a textological comparison with other Serbian and major Slavic prophetologia was performed. The comprehensive textological analysis has revealed the place of the Moscow Prophetologion among other relevant sources which contain the section preserved in this book (the paroimia between the Holy and Great Wednesday and the Holy and Great Friday - from Exodus 2:14-22, through the readings from the Book of Job, Prophecy of Jeremiah, Prophecy of Isaiah, Prophecy of Zechariah, to Exodus 33:11-13). Unfortunately, the prophetologia of Belgrade and Crkolez are not among them. The paper highlights the similarities between this source and the Serbian Prophetologion from Saint-Petersburg, as well as its analogies with the Lobkov Prophetologion, which are not unexpected for a prophetologion of a Serbian origin.