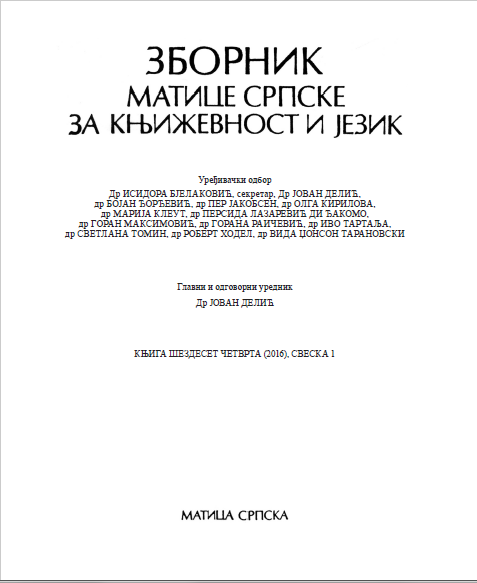 Summary/Abstract: In his article “The National Ground and Modernity” (1908) Dimitrije Martinović opens the subject that he would touch upon in his later texts, as well as the other Young Bosnia authors, in their attempts to overrule the externally imposed dichotomy between “national ground” and modern literary strands. The main part of the Mitrinović’s program texts is characterized by emphasizing subjectivity and authorial freedom, while the author does not insist on his own individuality from the collective surroundings, with self-explanatory “open, wide and likeable sense of duty” and solidarity with his “unliberated people”. Pero Slijepčević also addresses the shift in the understanding of national component in literature: from the collective and external to deeply personal experiential lenses, leading to unconscious and unaware depths. Jovan Skerlić’s views, verbatim or paraphrased, echo in the literary texts of the Young Bosnians, since it was Skerlić who delivered the realistic grounds for the national cultural uprising, based on the synthesis of national strongholds and the perception of contemporary trends. In the Crazy Poem by Miloš Vidaković the depth of the collective voice and knowledge emerges, announcing the poetics of the new expressionistic epoch, rebellious and subversive.