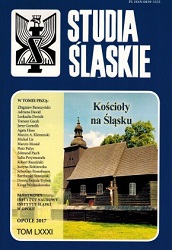 Summary/Abstract: In the late 19th and early 20th century, a wooden church in Upper Silesia gradually assumed a status of the symbol of the ‘authentic’, native culture. The interest, consistent with the ideals of Heimatschutzbewegung (movement for the preservation of the homeland’s countryside and culture), resulted in conservation and promotion activities, the most spectacular example being the translocations of the endangered buildings to the municipal parks of Bytom and Wrocław, inspired by the Scandinavian examples. Wooden sacral architecture could be perceived as an expression of the positive evaluation of the culture set in contrast against the overtechnicised and dehumanised civilisation, or as a startingand reference point for the achievements and progress of the civilisation brought by the Prussian and later German state to the Eastern peripheries.The interest in wooden churches was strictly connected with the competing nationalistic discourses developing in Upper Silesia. For some animators of the homeland protection movements, the folk culture was not merely a stimulus for the revival of the artistic language, but also the emanation of the national spirit. The strengthening of the bond with the tradition of the local homelands (Heimat) would lead to the identification with the ideological fatherland (Vaterland). In the inter-war period, wooden churches were used in the Polish-German dispute over the national identity of the region. On both sides of the state boundary there was adherence to the practice of translocation, and thus historical buildings were moved to Gliwice, Katowice and Chorzów. The images of churches appeared in the press and on posters; they were promoted as a significant element of the regional heritage in propaganda publications and photography. The Polish discourse took for granted the Slavic provenance of the log construction, considering it as the evidence in support of the Polishness of the native culture of Upper Silesia. Te German point of view in the times of National Socialism contested this thesis with the assumption of the Germanic origins of the local wooden architecture