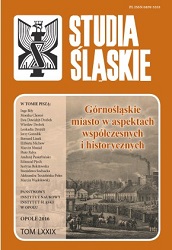 Obraz wspólnoty. Dzieła malarstwa wykonane dla kościoła Niepokalanego Poczęcia NMP w Katowicach z inicjatywy ks. Emila Szramka
The image of the community. Paintings made for the Church of the Immaculate Conception of the Blessed Virgin Mary in Katowice at the initiative of Fr. Emil Szramek

Summary/Abstract: In 1926, the parish of the Immaculate Conception of the Blessed Virgin Mary in Katowice, including the heart of Katowice, took over Fr. Emil Szramek - one of the leading figures in the intellectual life of the capital of the autonomous province of Silesia. The priest, who his vision of the Upper Silesian community, its place in Poland and Europe, published in his essay “Silesia as a sociological issue”, was also the initiator of new interior paintings at the Katowice temple. In the series of paintings of Mary, created by Józef Unierzyski, as well as in the polychromes and stained glass projects made by Adam Bunsch, ideas are expressed, which are present in the text of Father Szramek. By means of the medium of painting, the parish priest appealed to the society with various sense of nationality, which furthermore, is largely distanced from identifying itself in national terms. The image was used to legitimize the relations of the region with Poland, as well as new hierarchies, especially the position of the Polish oriented priests, to which belongs the principal itself. They are portrayed as successors of the patron of the Diocese of Katowice of St. Jack, relatives of the people, and thus authentic and faithful to the “true self” of the nation. A prominent place in the vision of a painter of the community was also granted to the young Polish-Upper Silesian intelligence, symbolically reconciled with the intelligence of Lesser Poland. Upper Silesians appear in the light of the painting decoration of the church of Katowice as a community, which thanks to its dynamism and living religiosity is expected to make a „Christianization of the state”, becoming a vanguard of the Polish nation, which the providence assigned the role of a bulwark of Christianity. The Catholic Church became - thanks to the artistic initiatives of the parish priest - a space of nationalization of the faithful in Polish spirit.