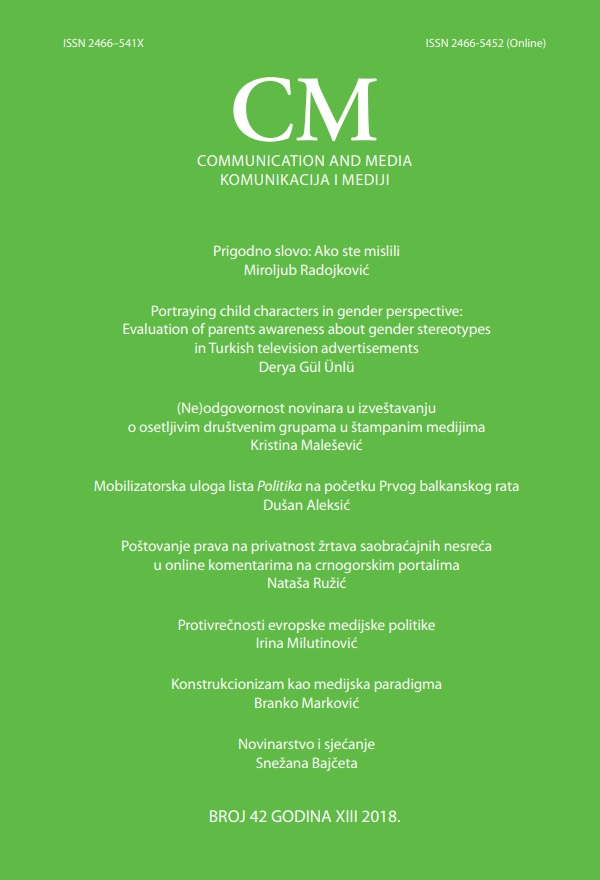 Summary/Abstract: The emergence of digital media on the market is accompanied by new ethical problems and dilemmas, which urges the necessity of a constant revision of codes of ethics. Technological development has led to the participatory journalism, which was supposed to result in the transformation of the media into a public forum. However, there is a clear tendency of citizens not only to exchange opinions in relation to topics of public interest, but also to comment on crime column articles, without paying attention to the victims’ right to privacy and mocking those affected. If journalists violated the citizens’ right to privacy with sensationalist reporting about crime and interviews with controversial figures in the 1830s, then today citizens are the ones violating the right to privacy of crime and accident victims by disclosing details about those involved in the events, while the media do not try to tackle this problem through internal codes of ethics. On the basis of content analysis of the comments posted on the two most visited online portals in Montenegro (Vijesti and Analitika), in this paper we aim to determine to what degree the media, but also the citizens, respect the right to privacy of the victims of traffic accidents. The results show that both portals take care of the ethical dimensions of the content of online comments: they are dominated by ethical comments in which the citizens express their views. With much higher number of comments than Analitika, portal Vijesti has a harder task and it allowed for publication the comments which contain sarcastic remarks about the texts.