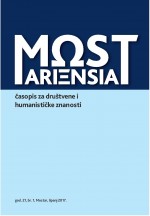 Summary/Abstract: Due to their close connection with source culture and language, cultural references frequently have no equivalent in the target language and are difficult to translate. Thus, it is not surprising that numerous studies dealing with the translation of cultural references have already been conducted. The starting point of any study carried out in this field is sample selection. Cultural references also need to be classified, which implies having to choose one of the numerous existing taxonomies. This paper presents some conclusions regarding the distribution and classification of English extralinguistic cultural references (ECRs) in movies based on a sample of twenty British and American films with Croatian subtitles. We analysed whether the application of Pedersen’s criteria (2011) can guarantee that the sample will be rich in ECRs and whether Nedergaard-Larsen’s taxonomy of ECRs (1993) is adequate for the study dealing with the translation of ECRs. The results suggest that the application of Pedersen’s criteria is useful, but does not always produce satisfactory results due to the factors which can cause the lack of ECRs in films. The broad categories Nedergaard-Larsen divides ECRs into seem to be both the advantage and the shortcoming of this taxonomy. Such categorization facilitates the classification of ECRs, but also complicates the process of determining which strategy was used to translate a specific type of ECRs.