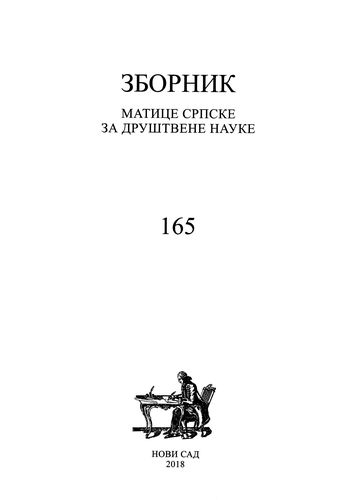 Summary/Abstract: The paper investigates the relationship between the state, society and Serbian Orthodox Church in 19th and 20th century, considered from the standpoint of national identity, as a basic principle of contemporary cultural policies. The aim of the paper is to identify similarities and differences in three intersecting points in time in the relationship between state and church, as well as look at possibilities and obstacles for their cooperation in the context of democratic transition and consolidation of society in Serbia, following the dissolution of Yugoslavia. The theoretical exploration starts from the position that Orthodox Christianity, as it is “dependent on the state and concept of national church”, is a source of nationalism and obstacle to democracy, based on which a number of intellectuals and civil organizations in Serbia are against acceptance of Orthodox Christianity as an identifier of national identity of post-totalitarian society in Serbia. Qualitative empirical research that investigated the starting theoretical assumptions is based on the case study of Pčinja county in the South East of Serbia, which is a religious, cultural and political centre of this part of Serbia, with monastery Saint Prohor Pčinjski located in its centre. The results of research demonstrated that repressive political factors supressed Orthodox Christianity from the public life, thus there is no empirical evidence of “Orthodox nationalism”, and instead we can observe that throughout 20th century the church was a victim of ideologies of Yugoslavia, Communist atheism and ethnical nationalisms of the newly established countries in the region. In Serbia, this type of relationship towards Orthodox Christianity moved from former party state that dominated the society into a section of civil society, whose political activities tend to overtake the role of former Communist party. This part of civil society, as it is burdened with totalitarian heritage itself, bases its political attitudes on the empirically unfounded theoretical speculations, which is why, despite its efforts, it represents a challenge to the democratization of inherited post-totalitarian cultural system and an obstacle for Serbian Orthodox Christian community to realize its democratic right to free expression of values and ideas in which it believes.