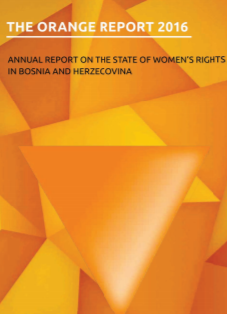 Summary/Abstract: Women and girls are frequently exposed to serious forms of violence, especially physical and verbal violence, violence in the family, psychological violence, sexual violence and rape. These and other forms of violence against women are a serious breach of women’s human rights and are the main obstacles to achieving gender equality. Statistics show that one in three women in the world is a victim of violence and that the perpetrators are frequently their current or former partners. The situation is similar in Bosnia and Herzegovina where violence against women and domestic violence have been considered a private issue for years, the attitude that is still widespread today. 52.8% of women over the age of 15 in Bosnia and Herzegovina have experienced some form of violence. In 2013 a study on the incidence of violence against women in BiH and its characteristics, was conducted on a sample of 3,300 households. The study found that one in every four women was a victim of violence and that one in every ten had been a victim of violence in the past year. This study found that women aged 18-24 are the most frequent victims and that women from rural areas are disproportionately affected. It is also important to note that women frequently cannot identify that violence is being perpetrated against them and they do not perceive themselves as victims – only 5.5% of those exposed to violence ask for help and support. The research also found that psychological violence is the most frequent form of violence women are exposed to, as well as a combination of psychological and physical violence.