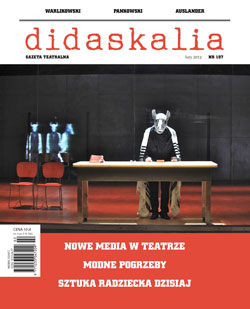 Summary/Abstract: A review of a book by Eli Rozik, The Roots of Theater (Naukowe PWN Publishers, Warsaw 2011). Kosiński says that the subject of Rozik’s work is anachronous, because the battle with the theory of the ritual roots of theater ended long ago, and the thesis Rozik is collapsing was defeated many years in the past (All the more so, given that Rozik makes no reference to recent works, such as Schechner’s Performance). Moreover, in Rozik’s theory itself – though it is inspiring in many ways – the reader “constantly stumbles […] on claims that raise doubts, or issues with which the author clearly cannot contend.”