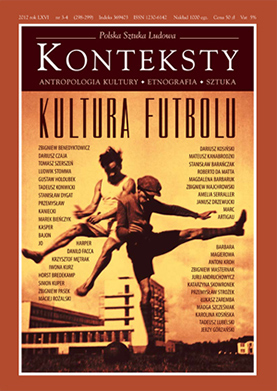 Summary/Abstract: While treating the football match and football as such as a specific and multi-dimensional phenomenon that, at the same, time, possesses numerous features analogous to better examined and described cultural phenomena, the author proposes to apply select theatrical conceits for the purpose of analysis. In doing so, he does not intend to prove that football is a theatre but through an analysis of those theatrical elements he hopes to capture certain traits specific for the football spectacle. The text considers successively an analysis of: 1) the manner of building, and the functioning of, characters created by football players (with Leo Messi and Cristiano Ronaldo as examples); 2) the relations between the fictitious and real nature of the football match; 3) the sui generis “scenario” of matches in the perspective of their foreseeability and non-predictability. Such analyses are to prove a thesis maintaining that the cultural and political significance of football is to a great extent the outcome of the fact that it is probably the purest model of fiction endowed with enormous real effectiveness, acting as a spectacular meta-commentary on contemporary Western culture.