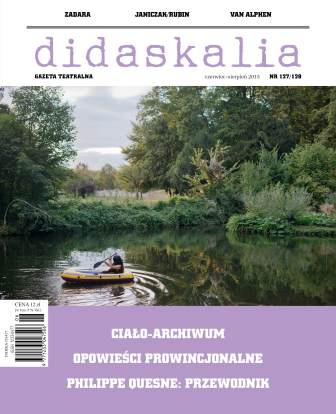 The theatre journal Didaskalia features reviews of Poland 's major theatre premieres; it also follows important events occurring in theatrical centres abroad. The most significant events of each theatre season are discussed extensively (including interviews with artists, surveys, reviews, expert commentary). Book reviews feature systematically (list of latest publications, with short summaries, and a comprehensive accounts of selected volumes), as well as commentaries on the more important premieres in televised theatre. However, commentary on current theatrical events is not the journal's only activity. It also regularly publishes editions dedicated to a particular theme or practitioner, translations into Polish, as well as extensive materials concerning various issues related to the theory and practice of theatre. Up until its 76 th issue, Didaskalia was affiliated with the Jagiellonian University (JU). Since March 2007 it has been published by the Grotowski Institute in Wroclaw , in collaboration with the Faculty of Polish Studies at JU. Apart from young authors, who often make their debut in the pages of Didaskalia , the journal includes the work of renowned critics and authors, not only from within theatre circles. Didaskalia also acts as a forum for discussion for creators and directors of theatre, in order to maintain a dialogue between theatre practice and theatre criticism. The journal engages with theatre performances in several ways: short, concise reviews, a more extensive outline, together with opinions from the audience (column and survey ‘after the premiere'); interviews, which also provide analysis of a given performance. The journal is addressed to a wide audience, so the editors strive for clarity and simplicity of style. Throughout its existence, Didaskalia has established a theatre community. A large number of students have made their debut here, later to work as critics in other journals and newspapers. The authors and editors of Didaskalia have also published numerous books on film and theatre. Thanks to a long-standing collaboration with scholars and critics from other countries, we not only have the capacity to cover the most important premieres and other theatrical events at a global level, but also of selecting the most interesting and important non-Polish texts. The position and recognition that the journal has established worldwide enables us to obtain texts by the most renowned authors. Didaskalia collaborates with the Jagiellonian University – the majority of the editorial staff are lecturers within the faculty of Theatre Studies. This scholarly knowledge, in combination with the openness and fresh approaches of the reviewers is of immense value. From the 77 th issue onwards, since Didaskalia was first published by the Grotowski Institute, the journal has mantained a closer association with Wroclaw 's academic circle.