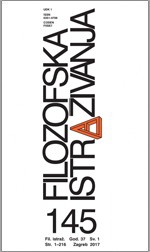 Summary/Abstract: This paper presents works from Serbia dealing with the history of Serbian philosophy, whose roots began century and a half ago (the first overview was printed in 1868). Throughout the 20th century there were several detailed overviews, i.e. the histories of Serbian philosophy, but neither the teaching nor the studying of Serbian philosophy stabilized. Since the beginning of the 21st century the number of books published in Serbia on the aforementioned subject increased greatly. The systematic work of Ilija Marić stood out. Also, two books with the title Istorija srpske filozofije [History of Serbian Philosophy] were published, one by Slobodan Žunjić and an anthology edited by Irina Deretić. Among other things, the paper warns about many factual errors, and other mistakes which weaken the useful value of worthy monograph by Slobodan Žunjić, a competent researcher.