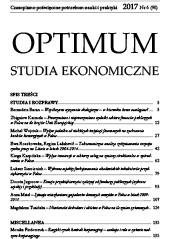 Summary/Abstract: The purpose of this study is to investigate changes in the housing situation of pensioner households inPoland in 2009-2015. The author identifies indicators describing the housing situation of Polish pensioners,dividing them into three categories: housing conditions, economic situation, and demographic structure ofpensioner households. The variation coefficient of most indicators was found to be low. The analysis is basedon data from the Central Statistical Office, mainly on the results of a survey concerning household budgetsand reports regarding pensions in Poland. The research indicates that most of the changes are positive in thearea of the level of satisfying pensioners' housing needs. There were negative changes in the demographicstructure of pensioner households (lower average number of persons per household and higher percentage ofsingle-person households). As far as economic situation is concerned, some of the changes (including the levelof income in relation to the average income in the national economy) are positive. However, negative changesoccurred in the level of households’ debt related to housing maintenance.