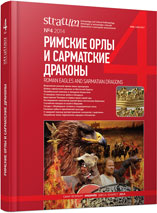 Summary/Abstract: The author considers grave goods, dating, social status and ethno-cultural attribution of a «princely» burial at Conceşti, found on the bank of the Prut River and nowadays kept in the Hermitage in St.-Petersburg. It is supposed to be burial of either a Barbarian leader of the early phase of the Huns' time, seemingly a leader of the Gothic «Kingdom», which occupied the northern territory of the Romanian Moldova and Northern Bessarabia, or a Huns' «regent» who might have controlled the Huns in this region. Some features of the funeral rite connected with the Greek-Roman tradition — such as vault built of slabs and presence of a funeral crown in the grave — are absolutely foreign for the funeral practices of the Eastern and Central European Barbarians at the Huns' time. No doubt, the people who buried the Conceşti ruler were well informed about the prestigious rites of the Empire and its satellite kingdoms. Attributing this burial to the Barbarians who advanced into the area of the Low Danube from a place in the Cimmerian Bosporus seems to be quite promising, specifically to the Huns of Uldis or the Goths whose presence in Bosporus in around 400 is well documented by written accounts.