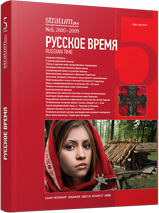 Summary/Abstract: The article examines tactics of the Slavic cavalry in Velisarius’s army during the Gothic war in Italy. According to Procopius of Caesaria, the Sclavenes and the Antes in Velisarius’s army were horse archers, who more often were fighting distantly, avoiding direct combat with their adversaries. No doubt, the Sclavenes and the Antes, or rather a relatively small part of them learnt this type of battle from the Huns, whom they neighbored on the Low Danube and in the Ukrainian forest-steppe areas in 5th-6th centuries. At the same time, during the Balkan conquest majority of the Sclavenes’ and Antes’ warriors were light-armed infantrymen, rather well described by Procopius and Maurice in their sketches on Slavic ethnography. Finds of typical armament of ‘nomadic’ type on sites of Prague, Penkovka and Koloczyn cultures (heavy three-winged arrows, belly clasps of bone, antler arrow piece, a hook from quiver belt) provide substantial evidence for the Slavs having a cavalry of ‘Hun’ type. The Slavs who inhabited the borderline along the forest-steppe zone or the Low Danube frontier with Byzantium enjoyed faster social development. They rapidly shaped military nobility whom the Avars had to face in 560s-570s... Kin relations in the Low Danube area do not seem to have been as rigid anymore, which allowed the Danube Sclavenes and the Antes to join the Rome army. Indeed, mercenaries have always been a solid indicator of collapse of traditional relations, which led to appearance of ‘free’ people not bound by kin obligations anymore. It seems that the lands in the Sclavene Low Danube area and the Antes’ forest-steppe zone was exactly the place to have seen formation of groups of professional warriors who showed their skills for the first time in 537-545 while at Justinian’s service.