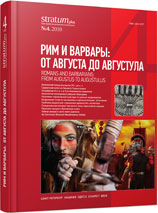 Summary/Abstract: The opinion that some trans-Eastern European trade ways connecting Scandinavia and Byzantium along the Russian rivers existed in 5-6th centuries has a rather long history. Their “discovery” is attributed to Scandinavians, and Scandinavian merchants are supposed to have traded in furs from Northern Russia and even from Western Siberia. Some historians maintain that in 6th century Scandinavians used to sell furs to the Byzantines in the mouth of the Don River. This paper will attempt to verify whether the hypothesis of the Eastern European origin of the Scandinavians’ furs is substantial. Scandinavian influence (and, in a number of cases, also their immediate presence) in the Roman Time and in early Great Migration Age did not spread farther to the east than Estonia and Western Finland. At least, it is not substantiated by any archaeological or written evidence. The fifth – early sixth centuries saw promotion of Eastern European and Scandinavian exports of furs to the south, the Mediterranean. In Eastern Europe, as Jordannes maintains, fur trade was controlled by nomads from the Pontic steppes, who played the role of middlemen, while in Central Europe this role was played by Germanic peoples from the Middle Danube area, who happened to live on the way between Scandinavia and the Mediterranean. Furs from Fennoscandia were exported to the south mainly through Central Europe. The early 500-550s were marked by a growing Scandinavian influence on the western outskirts of the Eastern European forest zone – on the islands in the eastern part of the Gulf of Finland and in the northern part of the Ladoga River basin. Most likely, it suggests a search for the new sources of “raw” furs. It does not immediately imply presence of the Scandinavians here, for the Baltic Finns could also be bearers of Scandinavian artefacts; their prestigious culture in Western and Southern Finland and in Western Estonia, for instance, was rather Germanized. At the same time,Finland, Estonia, Sweden, Baltic Sea islands, Prussia and probably the mouth of the Neman River saw development of barbaric ‘little kingdoms’. Scandinavians and Western Balts, judging by some artefacts found in Belarus, started groping their way to the south. They seem to have failed to find it in the direction Dvina-Dnieper, in the area of Tushemlinskaya culture, and so they moved into the mainland along the Neman-Berezina Rivers. This is not at all accidental: the middle area of the Danube River, which was part of the traditional routes from Scandinavia to the Mediterranean, saw a period of continuous wars between different barbaric kingdoms that emerged on the ruins of the Huns’ Empire aﬅer Attila’s death. This could sometimes jeopardize normal function of Central European communications, and so some by-pass routes had to be found. It seems that furs were the main reason for the Scandinavians, Baltic Finns, Danubian Germans, Slavs and Balts to come into the North-West Russia.