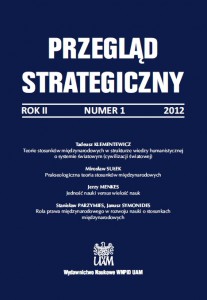 Summary/Abstract: The end of 2010 and the beginning of 2011 in Arab countries marked its place in history as the Arab Spring or the Arab Awakening, since during this period mass social, political and economic protests could be observed in almost all the countries in the region. Due to the nature, dynamics and the issues underlying the Arab-Israeli conflict, each and every material change in Arab countries is and has to be important for Israel and the whole Middle East. Considering the phenomenon being analyzed from the perspective of the Arab-Israeli conflict and Israel’s external and internal situation, in my opinion it is particularly important to attempt to answer the following question: Has the Arab Spring changed Israel’s strategic situation, and if so, to what extent? Looking at the ensuing situation from the perspective of Israel and also the Arab-Israeli conflict, at the very beginning we can have doubts or an opinion even less optimistic than in Europe about the nature of these changes. The Arab Spring may be regarded by Israel and also by the analysts related with the country as the beginning of the „era of uncertainty”. This is mainly connected with the changes regarding political regimes and the possibility of coming to or sharing power with Islamic movements and parties hostile towards Israel. The collapse of political regimes was accompanied by failures of the ruling political parties connected with these regimes. The gap was filled by dozens of new parties, with religious and Islamic parties being particularly strong. Time will show its long-term consequences. Israel cannot afford unjustified optimism and false opinions, and that is why it has to be prepared for negative scenarios since both the country’s elites and society are aware of that there may be no second chances in event of failure.